Julian 2: The Works of the Emperor Julian (Loeb Classical Library, #29) Julian the Apostate 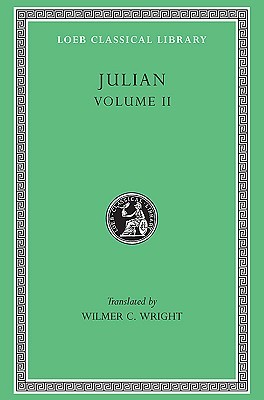 Born & educated in Constantinople as a Xian, after a precarious childhood he devoted himself to literature & philosophy & became a pagan, studying in various Greek cities. In 355 his cousin Emperor Constantius called him from Athens to the Milan court, entitled him Caesar, & made him governor of Gaul. Julian restored Gaul to prosperity & good government after the ravages of the Alamanni (defeating them at Strassburg in 357) & other Germans.

Between 357 & 361 Julians own soldiers, refusing to serve in the East at Constantiuss orders, nearly involved Julian in war with Constantius--who however died in 361 so that Julian became sole Emperor of the Roman world. He began reforms & proclaimed universal toleration in religion but pressed for the restoration of pagan worships. In 362/63 he prepared at Constantinople, then at Antioch for an expedition against Persia ruled by Shapur II. He died of a wound received in battle.Julians surviving works (lost are Commentaries on his western campaigns), all in Greek, are in the Loeb Classical Library in three volumes.

The eight Orations (1-5 in Vol 1, 6-8 in Vol 2) include two in praise of Constantius, one praising Constantius wife Eusebia, & two theosophical hymns (in prose) or declamations, of interest for studies in neo-Platonism, Mithraism & the cult of the Magna Mater. The satirical Caesars & Misopogon, Beard-hater, are also in Vol 2. The Letters (over 80, Vol 3) include edicts or rescripts, mostly about Xians, encyclical or pastoral letters to priests & private letters.

In Volume 3 are the fragments of the work Against the Galilaeans, written mainly to show that evidence for the idea of Xianity isnt in the Old Testament.

Comments
Comments for "Julian 2: The Works of the Emperor Julian (Loeb Classical Library, #29)":