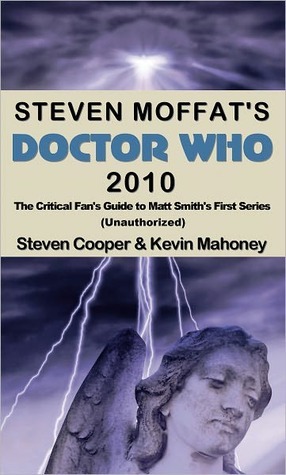 Indeed, there were many innovations in 2010, with the successful introduction of the youngest Doctor ever (Matt Smith), and the contentious redesign of both the Daleks and the TARDIS. Steven Cooper and Kevin Mahoney discuss both these developments and the complex plotting in depth, drawing on their many years of Doctor Who knowledge.

Their aim has been to provide constructive criticism of the 2010 series, giving praise where it is due while also pointing out the less successful aspects of the production. In addition to this, they examine the controversies surrounding the series, such as the complaints about the ‘sexiness’ of the Doctor’s new companion, Amy Pond, in the British media. They also critique ‘A Christmas Carol’, and Russell T Davies’ take on the Eleventh Doctor in The Sarah Jane Adventures. So much happened during series 5, with the overall threat posed by the cracks in the universe, that you really do need this indispensable guide to fully grasp the implications of all the events, and to discover the many obscure details that the authors bring to light.Steven and Kevin also speculate as to what might happen next, since the threat of the Silence has not gone away with the restoration of the TARDIS… And there’s still the question of who River Song really is: whether she’s the Doctor’s wife or his killer…Steven Cooper is a software developer and long-time Doctor Who fan, living in Melbourne, Australia.Kevin Mahoney is the founder and editor of the literary website Authortrek.

For three years, he served as the Web Content Editor of the Society of Young Publishers. He has previously worked for the UK publishers Random House and Orion. Kevin is also the author of the novel ‘A Fame of Two Halves’.