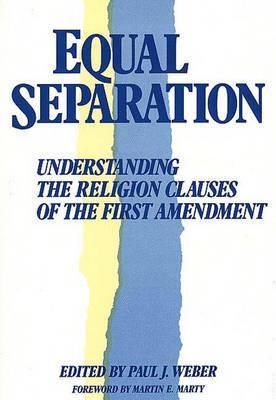 Editor Paul J. Weber argues that a 25-year-old theory called strict neutrality may provide a foundation on which a more compelling theory of the First Amendment religion clauses can be developed. Although superficially examined in a search for new approaches by many law-review authors, very little serious analysis has been done of strict neutrality/equal separation and little attempt has been made to develop the concept.

In Equal Separation, the pros and cons of strict neutrality are argued by six outstanding scholars who represent a challenging array of viewpoints- each critiques the concept by focusing on a different perspective. Despite vigorous disagreement over the conditions required for religious liberty and nonestablishment and the means necessary to achieve them, each authors dedication to the concepts is clearly manifested in this volume.In the first chapter, Weber outlines a strict neutrality thesis.

The next three chapters enlarge upon criticisms that focus on a defense of the free exercise of religion- offer a defense against strict neutralitys assault on the establishment clause- and contrast accommodation--pluralist theory--with strict neutrality. The issue of strict neutrality and the schools is addressed in Chapter 5, and an overview of the Courts development of the concept of separation of church and state is presented in Chapter 6.

The editors concluding chapter explores the criticisms and defends the strict neutrality/equal separation theory. This volume will be of particular interest to constitutional scholars, jurisprudents, and professors and students of law.

Comments
Comments for "Equal Separation: Understanding the Religion Clauses of the First Amendment":